Azimut Magellano 66 was awarded with the Motor Boat Awards 2017 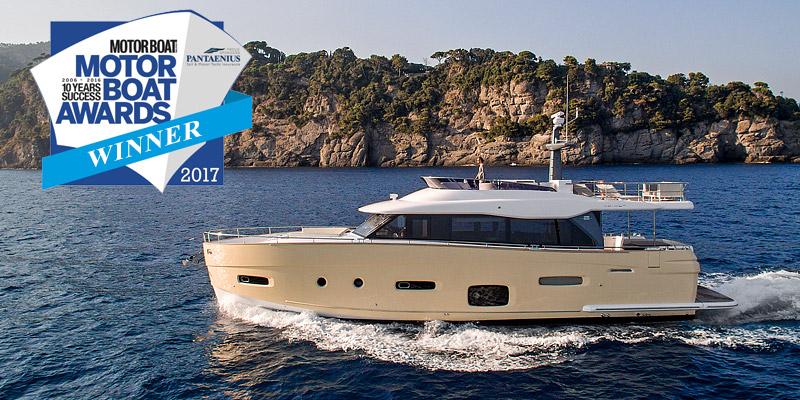 Azimut Yachts toast to a great 2017 opening: Azimut Magellano 66 was awarded with the Motor Boat Awards 2017, organized every year by the authoritative British magazine Motor Boat & Yachting, as best vessel in the Passagemakers category.

The prestigious awards have been assigned by a panel of judges including the magazine’s editors and experienced boat testers on the basis of the results of sea trials conducted over the past twelve months. Magellano 66, as well as all the finalists – among those there were also the Azimut 72 – in each of the 9 categories were required to undergo rigorous tests. What definitively convinced the jury to declare the Azimut Magellano 66 best Passagemaker, were the volumes and layout solutions that are indeed typical of larger boats – particularly in the Explorer version - ample storage spaces for an extended stay on board, together with the freedom of leaving for long range cruises thanks to the Dual Mode hull that ensures a very comfortable and safe navigation even in the case of rough sea.

The prestigious awards were officially presented during the Gala dinner held January 9th 2017, on the occasion of the London Boat Show. “With the Magellano Collection we have reinvented a new concept of yacht that combines the convenience of an Explorer with the exclusivity of Italian design. Following the Magellano range commercial success over the years, the award we have received for the Magellano 66" said Giovanna Vitelli, Azimut|Benetti Vice President "came as a further recognition of our continuous efforts in research and development of avant-garde solutions. If the Azimut Benetti Group has been recognized as the yachting world leader for over three decades, is because of its great capacity for innovation embedded in its DNA, that made Azimut|Benetti one of the true Made in Italy ambassador in the world.”